UAC plans annual Makers Fair on November 6
Come join the fun when scores of creative, crafty people show their stuff at the Union Arts Council's Makers Fair on Nov. 6, in the Family Life Center of First Baptist Church, Farmerville. Everything you see will be handmade by those vendors.
Bring friends...bring money...bring enthusiasm! Food will be for sale, too.
Want to be a vendor? Call Tammy at 281-389-1911.   Click HERE for vendor information and signup form. 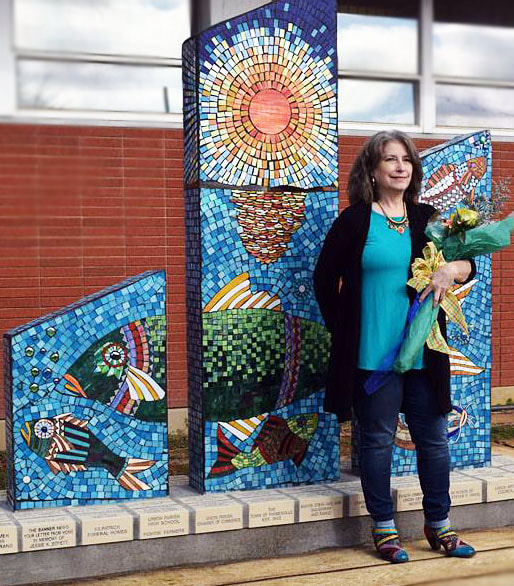 Jamie Anderson named UAC "Artist of the Month"
TA-DA! Union Arts Council has selected Jamie Anderson as its "Artist of the Month" for September. Jamie's most notable work is the gorgeous public art sculpture "Fishing Fantasy," which sits on the south lawn of the Union Parish Courthouse, where thousands of drivers daily can admire the sparkling glass tile mosaic. Jamie's smaller glass mosaics have won top awards in several Union Arts Council art shows in recent years, the most recent being Best of Show in the 2021 art show held in April.
Her "Fishing Fantasy" public art work was commissioned by the Union Museum of History and Art, and formally dedicated in December 2018.
Jamie has been creating mosaic artworks most of her adult life, but says she became passionate about mosaic art after being diagnosed with cancer and going through treatments. In her words, "My art became my release, my therapy, and my celebration of life. Making mosaics was my creative outlet that I had always searched for. It became a reflection of my emotions, a bright rainbow of colors expressing my view of the world."

Jamie Anderson with her Best of Show winner, "Boundaries"

Juror for the competition
The Union Arts Council was honored to have Vitus Shell as juror for its ninth annual Competitive Art Exhibition on March 27.  Shell is a mixed-media collage painter born in Monroe, Louisiana, where he lives and works as a visiting assistant professor of art at the University of Louisiana at Monroe.
Shell earned a BFA from Memphis College of Art in 2000 and an MFA from the University of Mississippi in 2008.  Currently, he is working on a group show at the Masur Museum in Monroe, titled “The South Got Something to Say.”  Shell has participated in exhibits across the country, painted a mural for the National Civil Rights Museum's NBA Pioneers exhibit, and was commissioned for public art by the Memphis UrbanArt Commission.

We are supporting the arts, encouraging artists, and showcasing creativity...here in our homeplace.