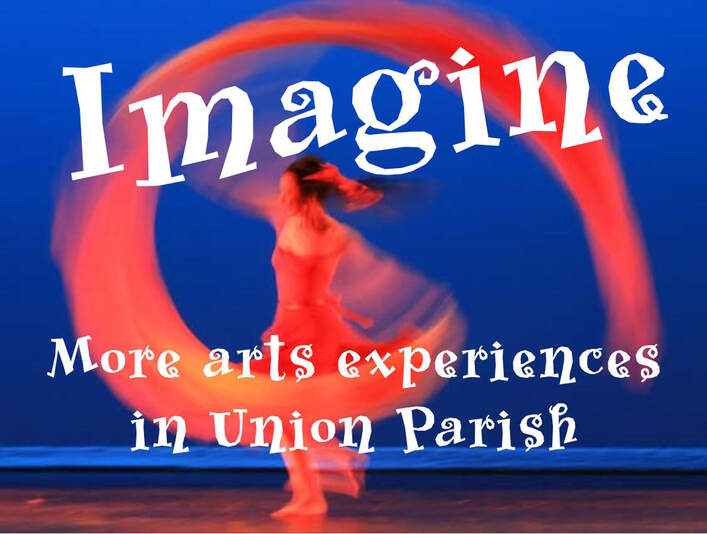 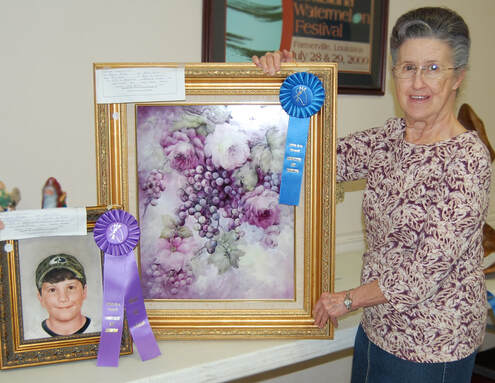 TA-DA!  Union Arts Council is proud to announce its Artist of the Month for October:  porcelain artist Adina Miller!
Adina’s artistry has captivated viewers for decades and today adorns every room of her home in Marion---even wash basins and kitchen tiles.  In her long career, she has taught untold numbers of individuals the complicated techniques of porcelain painting, and has produced many commissioned works.  In 2014, her portrait of her grandson painted on porcelain won Best of Show in the Union Arts Council Competitive Art Exhibition in Farmerville.
When Adina was young, she yearned to paint porcelain, but could find no one to teach her.  So she went into oil painting, instead.  She took lessons from Larce Holder in Farmerville, and Jeannie Grafton in Bernice.  She traveled to Colorado and Springfield, Missouri, to learn from famed oil painters.  She then taught oil painting to scores of adult students---50 per week at one point, she says.
Adina became a master artist in oils, but she still longed to paint porcelain:  famed for its beautiful bright white translucence, and brilliant appearance once painted.
At last, in 2000, she found a porcelain art group in Ruston, thanks to advice from fellow artist Joye Hinton.  Adina learned how to mix and apply porcelain paints, and the repetitive process of thin painting, firing at 1300 degrees, cooling, thin painting again…repeat several times.  “It’s slow, it’s tedious," she says.  “But the results are worth it.”  As a perfectionist, Adina works to improve her craft, even spending two weeks in Texas learning from renowned porcelain artist Kay Houston.
Despite recent health issues, Adina teaches her craft to students twice a week, and continues her own creative journey of adorning porcelain lamps, bowls, plates, slabs.  It’s a personal mission, perhaps.  “Porcelain art is dying in the United States,” she says, with obvious regret.
So as Adina leads her one-woman crusade to save her favorite art medium, we say, “Lead on! We’re with you!” 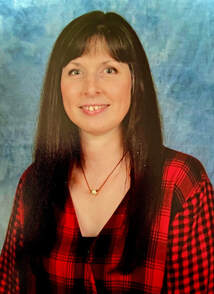 Janet Sanson named UAC "Artist of the Month" for September
TA-DA!  Union Arts Council is proud to announce its Artist of the Month for September.  It is music teacher and performer Janet Sanson!
Janet has taught music at Union Christian Academy for 22 years, focusing on piano and singing.  “I enjoy sharing with children how to share the gospel through music to the world,” she says.  “I will continue to do this as long as the Lord allows.  I am honored to share my gifts while teaching others how to find theirs.”  She also has been the pianist at Crestview Baptist Church in Farmerville for 20 years, and has served additionally as worship leader for the past nine years.
As a child growing up in Shreveport, Janet Elizabeth Parker enjoyed painting and drawing as well as playing the piano. “I began piano lessons at age 7 and took lessons every year until graduation from Captain Shreve High School in 1985,” she says.  She also took all the art classes she could in high school.  As a freshman at Louisiana Baptist College, she struggled to decide which field to major in:  music or art.  Music won out, because, “I felt I could make more money in that,” she says.
Her extraordinary talent became quickly apparent even as a college student.  She filled in as pianist in local churches and taught piano lessons to children.  Janet played and sang in the Baptist Student Union group “Hosanna,” which traveled around on the weekends doing church services and youth lock-ins, and summer mission trips.  One summer mission trip was to the Grand Canyon, where the students performed two musicals---one patriotic, one Christian---for several weeks for the tourists.
After graduating from college, she married Dave Sanson in 1990.  “I have used my musical background in most places we have lived in serving as pianist in churches, and also giving piano lessons to children,” Janet says.  In Hughes Springs, Texas, she was the high school choir accompanist, and accompanied the band students to Austin when they competed at the state level.
When Dave and Janet moved to Farmerville, she was looking for a place to continue to teach music.  “I came across this little Christian school that was held inside a Baptist Church.  I went in and asked if I could possibly teach piano lessons there to any of their students that might be interested,” she says.  “Little did I know that they had been praying for a music teacher.”
Union Christian Academy and all of its students over the past 22 years have been blessed…and so is our community…because Janet is here sharing her talent and her faith.

Andrea Beckler named UAC "Artist of the Month" for August
TA-DA!  Union Arts Council is proud to announce its Artist of the Month for August!  It is the talented Andrea Beckler, portrait artist.
Andrea says she enjoys working in several mediums including watercolor, graphite, acrylic, silverpoint, and wood.  “I’m in love with watercolor right now,” she says.  “I’m primarily a portrait artist and while I work in standard scale, I especially enjoy painting miniature watercolor portraits.  I love the challenge of capturing someone’s expression in a difficult medium on a tiny canvas. When it all lines up, it’s magical!”
Andrea says she became serious about art in her early 20s, learning her craft with no formal lessons.  “I graduated from Northeast Louisiana University in Monroe with a degree in education and very quickly realized that I was not cut out for it. I knew that I would never be happy teaching elementary school.” So by collaborating with artist-husband Dave, Andrea evolved into an artist, and found her happy place.
In addition to pursuing traditional painting, she also is a tattoo artist along with Dave.  The two own Stargazer Studio at 113 W. Jackson Street in Farmerville, where they create custom tattoo designs for clients, and display Andrea’s artwork.  Of special interest are Andrea’s custom portraits of children and pets.  “Opening an art and tattoo studio early in 2020 during the very beginning of a global pandemic was absolutely crazy but we have been blown away by the reception that our studio has received in the past two years,” says Andrea.  To see a little of their work, check out Facebook @yourstargazerstudio.
“The people in this area have been an absolute delight,” says Andrea. “We love Union Parish and we are so proud to be a part of this community.”
It looks like Union Parish people love Andrea right back. 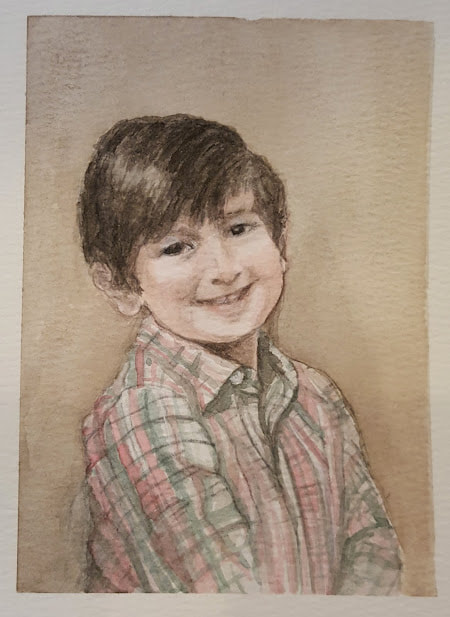 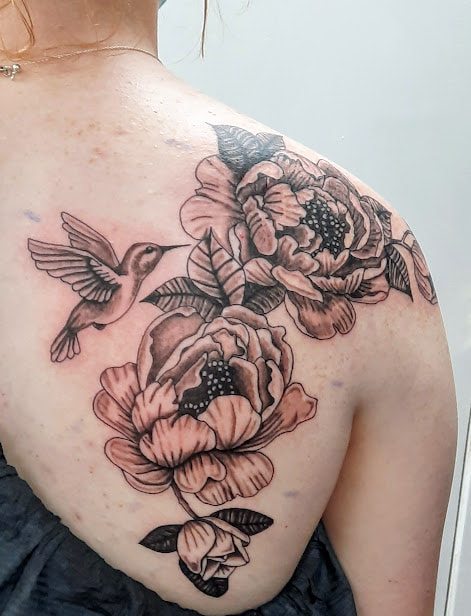 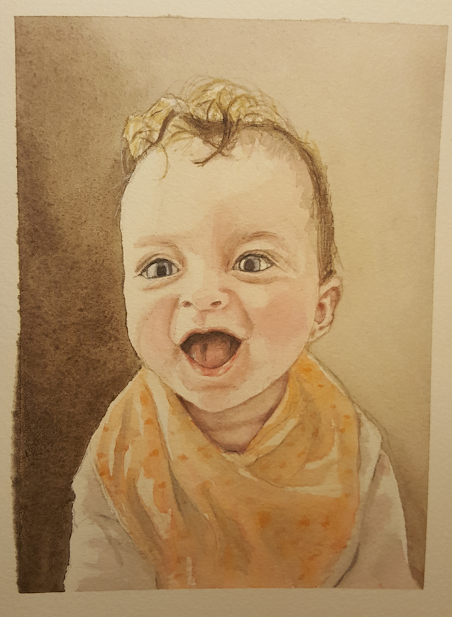 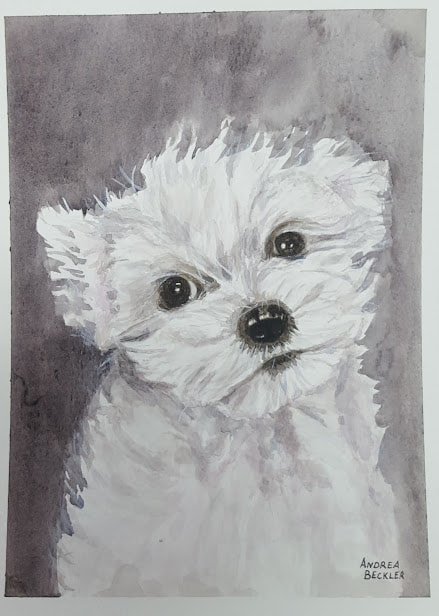 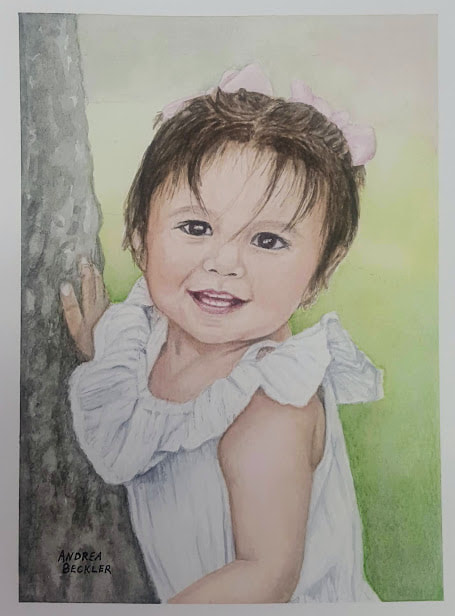 Previous Artists of the Month

We are supporting the arts, encouraging artists, and showcasing creativity...here in our homeplace.